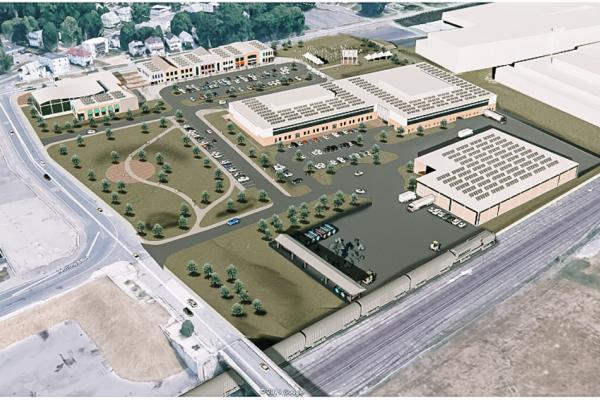 In a virtual press event via zoom the City of Pittsfield and the Pittsfield Economic Development Council (PEDA) were recognised by Massachusetts Governor Charlie Baker for their recent award of two significant and competitive MassDevelopment grants that included the Site Readiness ($880,000) and Brownfields Remediation ($264,000) grants, both of which will be used to further the implementation efforts for redevelopment of a large former GE industrial site.

Starting in 2018, the project team, consisting of SLR (previously MMI) and trusted partners EDM and OTO, initiated visioning discussions with leadership of the City of Pittsfield and PEDA defining critical elements for the development of a new redevelopment master plan for the 17-acre site.

In the virtual meetings throughout the day, Governor Baker, Lt. Gov. Polito, Secretary Kennealy and new MassDevelopment President & CEO Dan Rivera, and Mayor Tyer of Pittsfield announced the Site Readiness programme grants had been awarded to only ten municipalities. The City’s event featured several key project team members that included Mark Arigoni (SLR) who spoke to the importance of the creation of a flexible and phased masterplan that included a priority of making the site more attractive to private investment and preserving dedicated greenspace in achieving the full vision of new and significant piece of the William Stanley Business Park.

Pittsfield Mayor Linda Tyer noted the ‘perfect timing’ of the grant that will allow the city to reestablish the former GE campus as reemerging economic hub with the priority of blending this project with several other ongoing City initiatives, creating, and preserving green spaces, and maintaining the ultimate vision for a full build out which will include for the private investment into manufacturing, warehousing, and retail/office space on the site. Through the question-and-answer period of the press conferences it was noted that the City is hopeful the funding will allow for the completion of design engineering documents, and that initial stages of site preparation construction will begin later this year.